Lacy Construction is honored to have been recently named the recipient of the Main Street Commercial Interior Improvement Award. Elizabeth Chase, Executive Director of the Nebraska Main Street Network presented the award.

The Nebraska Main Street Network exists to help communities develop traditional commercial districts so that they are attractive to residents and business-friendly for commercial investment and economic growth. The organization helps communities work through the revitalization process, provide support as they develop solutions, build partnerships, and plan for the future.

“This award is presented to the best commercial interior improvement of a downtown building. The award is given to the project that takes special care in enhancing the historic characteristics of a building’s interior,” noted Chase.

Performance Plus has made a name in the agricultural industry by providing customized liquid feeds to cattlemen throughout the region. With operations now in Idaho, Colorado, and Nebraska, Performance Plus continues to be a leading provider of cattle feed solutions. Originally headquartered in Palmer, a planned expansion of their outdoor division led them to purchase the former Donna’s Fashions building at 206-208 N. Wheeler Avenue in Grand Island. Lacy Construction was tasked with the renovation of the 100+-year-old building. 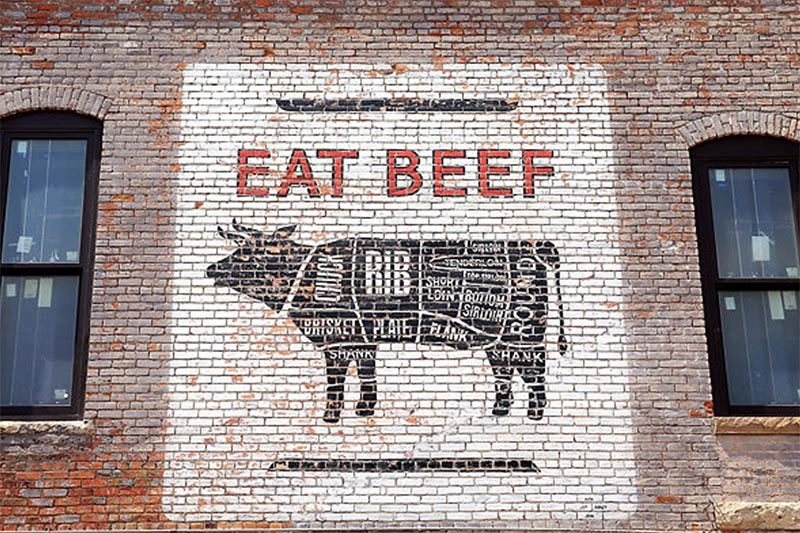 The project began in September 2015 and was completed in October of 2016. The renovation attracted a lot of attention, especially when Performance Plus’ “Eat Beef” sign was painted on to the building’s south-facing exterior brick wall, catching the eyes of passersby on 2nd Street and Highway 30. The painting of a cow showing the different cuts of beef was made to look like an old fashioned advertisement, leaving some people wondering whether it had been there all along.

Lacy Construction workers did, however, discover an interior wall that used to be the building’s north exterior wall. It was lettered with advertising images and text for “carriages, wagon and farm implements,” “cream separators,” “Bull Durham Tobacco” and “Thos. Cusack Co. — Chicago.”

Cusack was a pioneer in the outdoor advertising field, so we believe his company likely lettered that former exterior wall. Cusack was appointed to the school board in Chicago, later served on the general staff of Illinois Gov. John Altgeld and was then elected to Congress from 1899 to 1901.

The billboard signs found in the building were a bit faded, so Performance Plus Chairman, Jerry Heidelk hired sign restorers to bring them back to their original luster. The natural brick walls have been sealed, the maple floors sanded and stained, and the original tin on the 14-foot-high ceilings restored.

Lacy’s Project Manager Drue Bamesberger found that the building’s walls are built right on the lot lines, which is common in downtowns, so the company needed special easements to upgrade water lines.

“The city was great to work with on this,” Bamesberger said.

New windows let in lots of natural light into the large offices, spacious lobby and a second-floor breakroom and conference room. Second-floor light fixtures were salvaged and were restored for use on the first floor, an intricate old radiator was left in place on the second floor to bring a mix of old and new, and large barn doors were made to add a rustic flair to offices on the first floor.

The Lacy team was delighted to work with Performance Plus on this project and to have been recognized by The Nebraska Main Street Network for all our hard work.