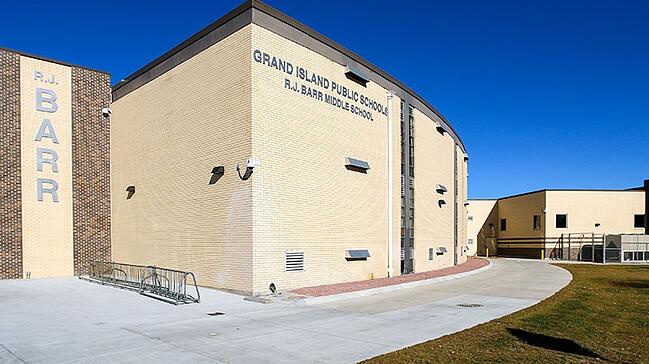 Lacy Construction recently completed the remodel and expansion of Barr Middle School in Grand Island, Nebraska. The $12 million projects for the Grand Island School District, involved the addition of 36,300 square feet of space and a remodel of the existing school building, which is located at 602 West Stolley Park Road.

Specifically, we updated the gymnasium with new basketball and volleyball courts and installed a rubber floor system in both the gymnasium and nearby corridors. All rooms were equipped with new variable air volume (VAV) systems and we added a three-level stair tower to facilitate safe egress in the event of a fire. Construction was completed in four stages to avoid disruptions and to ensure the safety of Barr Middle School’s students and staff.

In our quest to find the best construction methods and materials, various innovative techniques and equipment were used on this project.

The large floors were all poured using our Ligchine screed, a concrete screed that ensured a fast, smooth, and accurate application. The screed is guided by a laser leveling system that automatically adjusts 10 times per second and is capable of smoothing 10,000 square feet of concrete per hour. For all you baseball fans out there, that’s the equivalent of a Major League infield!

Rather than spend extra time and money on demolition, we also pumped an abandoned water line with grout instead of removing it, saving nearly $5,000 and about a week of construction time. Cardboard templates were placed in an existing radius stairway system as a low-cost method of determining the placement of decorative metal panels. Our team also used a 36” diameter saw to cut through foundation walls and concrete canopies, leaving a clean-finished surface. 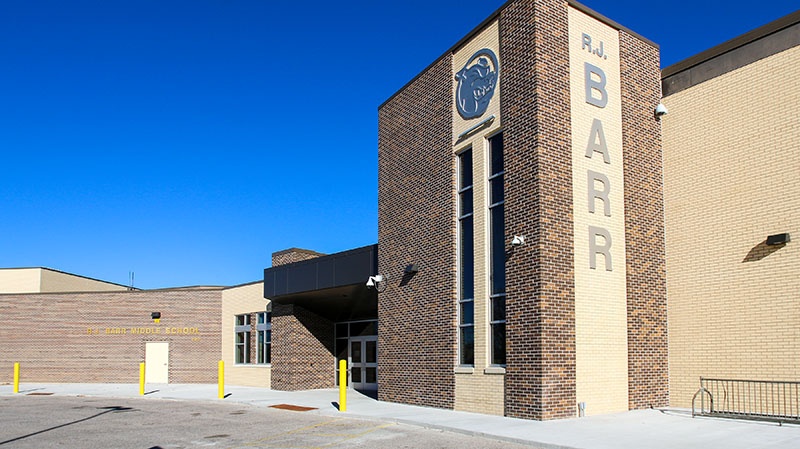 For this project, we recognized the need to digitize our workflow, so we used the Submittal Exchange program by Oracle to manage all aspects of this complex job. All submittals, RFIs, ASIs, proposal requests, and punch lists were all distributed and electronically tracked through this system. Thanks to Oracle’s technology, we were able to save time, money, and resources equivalent to 15.7 trees, 3,196 shipping days, and $26,754 of mailing expenses.

Most job sites encounter challenges and this two-year project was not an exception.

Our team was presented with numerous weather-related and scheduling problems. Our main concern involved student and staff safety. Circumstances required us to perform most of our work during school hours, and maintaining a clean, quiet environment was paramount. Barr Middle School was able to accommodate our team by shifting classrooms into other parts of the building. We focused on completing the largest portion of the addition first so the school could expand into the new space during the final phases of construction.

We also utilized the school’s summer breaks and holiday vacations to remodel community spaces, such as the cafeteria and athletic locker rooms. Daily communication between our job site superintendent and Barr Middle School’s principal ensured these transitions would be as smooth as possible.

Nebraska’s notoriously bitter winters can provide serious temperature and moisture challenges on the job site. It is incredibly difficult to erect masonry walls in freezing temperatures. We overcame these weather-related issues by utilizing specialized scaffolding and poly tenting to enclose entire sections of the building. Heating units were also installed to maintain a constant temperature, allowing the walls to cure properly.

Despite best-laid plans, we did encounter some unforeseen building conditions that threatened our schedule.

The school’s low ceiling heights, narrow clearances for plumbing and ductwork, floor conditions and asbestos were all problems that we were able to overcome with constant communication and brainstorming between the Lacy team and our subcontractors.

Lacy Construction Company is honored to work with the Grand Island School District. We enjoy working with a community that is committed to providing its residents with educational facilities of the highest quality. In addition to the expansion and renovations at Barr Middle School completed in December 2017, the Lacy team also constructed the new 80,000-square-foot Starr Elementary School located at 1800 South Adams Street in Grand Island.