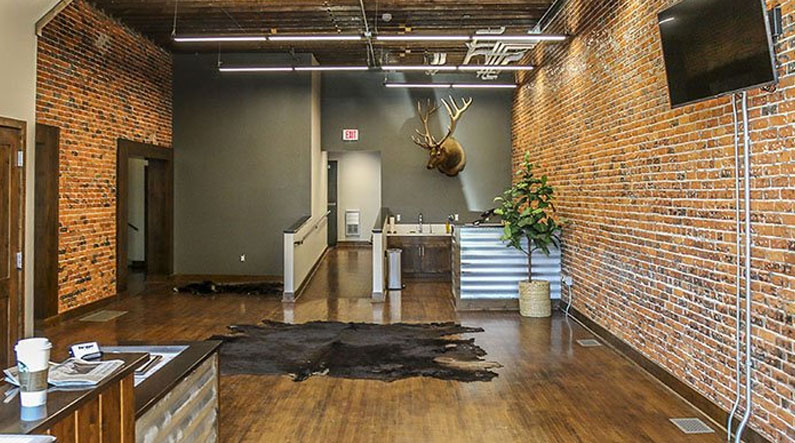 When Performance Plus Liquids, Inc., chose Lacy Construction to remodel a 115-year-old, two-story brick structure in downtown Grand Island, Nebraska, neither expected the many historical surprises that greeted them at every turn.

What began as part demolition, part renovation, quickly turned into a historic restoration project. Performance Plus reached out to Lacy in November of 2015 to give the 5,808-square-feet structure (plus basement) a much-needed facelift.

But once this project got under way, we quickly discovered the building wasn’t just one structure.

It was actually two, separated by our most historic find — a brick wall covered in logos painted by hand more than 100 years ago!

Of course, no one (client or contractor) wanted to cover all of that history back up. So Lacy was charged with carefully removing the plaster, cleaning the bricks and lovingly restoring the paintings back to their original glory.

Now, this unexpected find is the centerpiece of one of Grand Island’s most historic restorations.

Even before the brick wall was discovered, Lacy planned to give the building a rustic look to fit its occupants, which included companies that produce cattle-feed additives and antler-growth supplements. The historic restoration was just the icing on the design.

In addition to the walls, many of the building’s original floors were restored, and surprisingly, after 100 years, some floors only needed cleaning and sealing. Lacy also resurrected bricked-over windows, carefully removing each brick to be reused in other parts of the building.

The building’s decorative tin ceiling panels, which can be seen throughout many of the offices and in the main-floor hallway, were also kept for historic charm. Topping off the design, sliding knotty-alder barn doors serve as office doors.

In the end, what began as a renovation became a welcomed restoration — after all, there’s nothing like breathing new life into an old building.